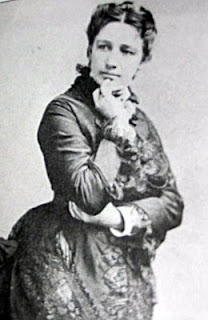 Hilary Clinton, Geraldine Ferraro, Sarah Palin, and Victoria Woodhull. Woodhull?? You might not know that way back in 1872, The Equal Rights Party nominated her for President on May 10, 1872. That’s about half a century before women were awarded the right to vote. According to a Wikepedia article on Woodhull, former slave Frederick Douglass was the choice for Vice-President, but he never acknowledged the nod.

Born in 1838, Woodhull was an outspoken advocate of sex education, free love, short skirts, and women’s rights. For six years (1870-1876) she co-published with her sister Tennessee Claflin, Woodhull & Claflin’s Weekly. You can read an archive of the papers online. The two sisters were the first female stockbrokers on Wall Street and amassed a fortune.

Victoria Woodhull’s name never appeared on the presidential ballot and she didn’t receive any electoral votes, but it appears that she did receive a few popular votes.

In 1876 Woodhull moved to England where she died on June 9, 1927. The thrice married Woodhull retired from public life around 1901.