My Dad, James William Taylor, Jr., was a man of few words. When you’d ask him a direct question you’d rarely get a full answer. Towards the end of his life he spent a day mentioning 1943. I don’t know why. He really didn’t want to talk about it.

Like so many of his generation, Dad enlisted in the United States Army during World War II. From October 22, 1942 to February 5, 1946 he served his country as a member of Company D of the 389th Infantry regiment as a Heavy Machine Gunner. He spent 18 months in Hawaii and several more in Japan. As kids we heard about the geishas of Japan and the pineapples of Hawaii, but never anything about his military service. He died on September 21, 2007.

I’ve inherited several photos of men in military uniform and a few of some Japanese citizens he befriended. It’s an ironic twist to my work as The Photo Detective. All the pictures are unidentified. I didn’t know they existed until after he died. Now I’m trying to piece together the life he didn’t want to discuss.

In a very personal Veteran’s Day column I thought I’d feature two of the images of these men in uniform. If you know who the unidentified fellows are please email me at mtaylor@taylorandstrong.com. 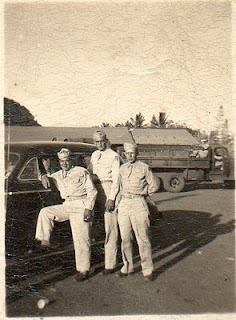 My Dad is in the center of this image. On the left is “Uncle Teddy” Hunt who lived in New Bedford after the war. He was no relation, just my Dad’s best friend from the service. I don’t know the name of the man on the right or where this was taken. Teddy Hunt died when I was just a kid. I’m not sure of his exact first name. Just another mystery to solve! 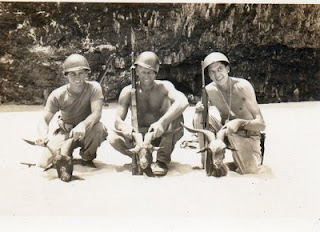 These three men are unidentified. Anyone want to comment on the significance of the animal heads!