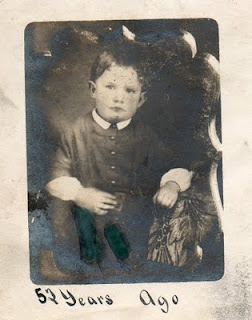 This summer my mother-in-law showed me a photograph that commemorated the 50th anniversary of her great-grandparents. She asked if I could have a look and compare it to another photo of a smaller family group. Could I match up any of the people in the two photos? I love a challenge so I said, “Of course!”

I turned over the first image and asked, “Who owns the original?” “I do, ” she replied. Hmmm. If this photo was taken in the late 1890s, then it wasn’t possible for the image in my hands to be the original. It was a twentieth century resin coated picture with “Kodak” written on the back. It was a copy! Now she’s hoping to find a relative with the actual 1890s image. My fingers are crossed.

Her dilemma is unfortunately not unique. In every family photo collection are copies of much earlier images.

For instance, this photo postcard image is labeled “52 years ago.” The postcard dates from the early 1900s which means this tyke posed for a portrait in the mid-19th century. Unfortunately the person who wrote the caption didn’t include the child’s name.

Look closely at this photograph. You can see the scalloped edge of the mat that covered this image. The photograph’s shiny surface reflected light during the copying process. It’s clear that this is a copy of a daguerreotype, but where is the original?

I’m really intrigued by these “lost images.” It’s obvious that someone wanted to have another copy of a picture. Back before digital sharing technologies, the only way to “share” an image was to make another photographic copy.

So why care about the original? Looking at an original photo lets you feel a connection with the past. There are often identification details such as a photographer’s name or a caption on the back that are cut off in the copy. Tracking down the original provides you with a link to the owner – and more clues to help you solve the mystery!

Take a good look at the images in your family collection. What you think is an original, may not be. If you have a story about a “lost” original, send me a note.