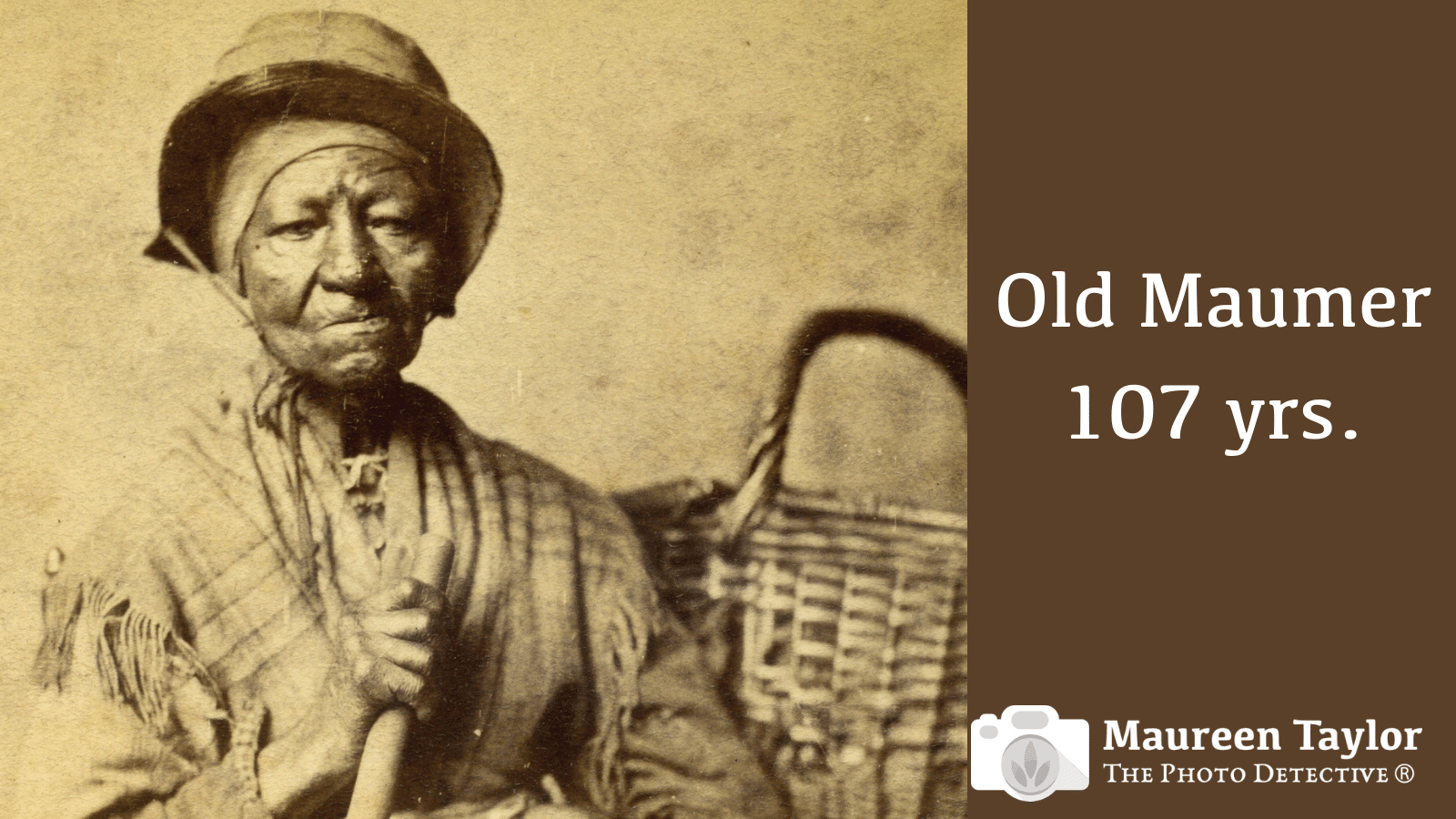 Several years ago I purchased this image at a photo show.  It called to me from a case.  “Find my story.” “Name me.”  So I bought the image intrigued by the research possibilities.  She’s in my book, The Last Muster: Faces of the Revolution.  Here’s what I wrote.

At some point in the late 1860s, photographer George N. Barnard took this stereograph picture of an elderly former slave. He posed her with her basket of wares and titled it, “ Old Maumer, aged 107 years, Charleston, S.C..” It is number seventy one in a series of stereo views of the city and surrounding area. Number 72 in the series depicts a different woman and is titled “Old Maumer selling groundnut Candy in the Streets of Charleston, S.C.”

The term “Old Maumer” refers to an elderly African American woman who may have had child rearing responsibilities at some point. Barnard is also known for his truthful images of the African American community in Charleston.

Barnard was a well-known photographer during the Civil War, taking pictures of Sherman’s campaign. He published the scenes of destruction in Atlanta and Georgia in his Photographic Views of Sherman’s Campaign (1866) and after the war worked in Chicago and Charleston. After the fiery destruction of his Chicago studio he concentrated his work in Charleston from 1873 to 1880.

The yellow cardstock used for this stereo card was popular during the late 1860s and early 1870s. A stereo photograph was taken with a special two lens camera that photographed the same scene with slight differences so that when a person used a stereopticon viewer the scene appeared three-dimensional.

If Barnard took this image in circa 1873 and the age of the woman is correct then this woman was born in approximately 1766. It’s also possible that she wasn’t aware of her age and that this is an exaggeration. Nineteenth century individuals didn’t always know their correct age. However, a search of the 1870 Federal Census for Charleston County, South Carolina yields four women born between circa 1762 and 1764. Sue Alston (born about 1764) lived in Charleston’s 1st ward, Betty Frazer (born about 1765) lived in Saint Andrews, Maria Jefferson (born about 1762) lived in St. James Goose Creek and Dianah Vanderhorst (about 1764) lived in Saint James Santee. It’s possible that the Old Maumer in scene 71, is one of these women. A positive identification relies on the discovery of another identified image of the woman.

Image identification relies on peeling back the layers of time, place and person. In this case, the place was plainly printed on the stereoview. Clues in the photo format and the photographer’s work dates revealed a time frame.  What still isn’t known is her name.